The coolest thing? Curing patients of their cancer.

My name is Marium Naeem and I’m a Radiotherapy Physicist and I work in the NHS.

So a normal working day for me can vary on a day by day weekly basis. On the first day I could be doing something like treatment planning, so that’s kind of deciding how patients get their treatment. So a clinician would draw a contour that’s essentially cancer, and it would be my decision to say ‘where do we want the radiation to come in from’. On another day I could be doing quality control checks on a linear accelerator. It’s a very high energy X-ray treatment machine and it’s about 5.5 tonnes worth of weight, and it rotates around the patient and it targets cancer.

So I wanted to become a Radiotherapy Physicist after I did my MSE in Medical Physics. I did a module in Radiotherapy Physics and it kind of peeked my interest. And then after that, when I did the clinical science training scheme, I did a 6-month placement in it and I just absolutely enjoyed everything that I did in the placement. So from there I was ‘Right that’s what I want to do, that’s what I’m going to be when I’m grown up’.

I think one thing that people don’t know about Physics as a science in general: there are a lot more women now involved especially in Radiotherapy Physics, and I think that’s a testament to the subject itself that women want to, you know, participate and have careers in science, and especially in Physics, because it’s traditionally a male-orientated field. But actually Radiotherapy Physics, especially my department, we’re predominantly women. I think that’s quite a good thing to say about science.

As a clinical department, we are very very busy. So everything we have to do fits around the patient’s schedule. So quite often, we do have to do early morning starts or late finishes. The other thing as Physicists we have to do, is we have to liaise with a large number of non-scientist groups, so we liaise with doctors, with radiographers, who are the people who do the actual treatment delivery on the linear accelerators, and with engineers as well; so we have to work side by side with quite a large number of groups. Everything we do is a joint effort, you can’t kind of wander off on your own, just get everything done by yourself. We work as a team.

Do work experience if you want to consider a career in Medical Physics. I think that’s really important, it will give you a flavour for what we, as Physicists, do; it will expose you to some of the things you wouldn’t necessarily know about; and it will tell you whether or not you have an interest in the field. You’ve got Radiotherapy, but you’ve got Medicine, you’ve got PET. It’s just the variety is quite crazy in Medical Physics.

So I’d like to think we’re curing patients of their cancer, giving them the best treatment that they can get, and I think it’s quite rewarding when, you know, you’ve gone up to one of the machines and there is a box of chocolates and it’s from our patients that are very grateful that we’ve helped look after them for 7 weeks and that just makes it all the more worth what we’re doing. That’s why you come to work.

A few words from Marium ...

I am a Radiotherapy Physicist.  No, this does not mean that I am boring, I promise! It means I have a fantastic job where I get to help people with cancer.

Most people think that patients are only cared for by doctors and nurses; however, there is a larger ‘minion force’ (in a good way) behind each patient’s treatment, and I am very proud to be a part of this.

My job involves working with large machines called linear accelerators. These machines ‘fire’ radiation at patients to kill cancer cells. I have to make sure that the radiation coming out of these machines is correct. I also help decide on new and improved ways of treating patients by developing new ideas.

I get to look after the machines that take pictures of patients. This includes CT and MRI scanners. One of the fun things you can do with a scanner is take pictures of random things in a box and then get people to guess what they are. Have a look at the picture below, which is a scan of a number of everyday items. In it are some bars of chocolate, a computer mouse, a Rubik's cube, part of a skeletal hand, and a child's toy - see if you can identify them! 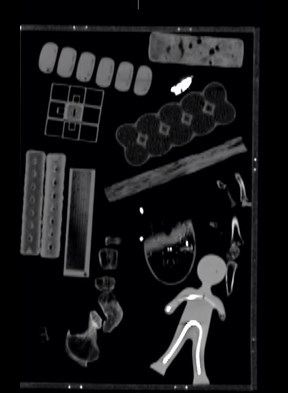 I can help treat a patient with cancer by deciding where radiation will enter their body and how many beams are used. I use computer software to design a treatment using CT images.  The picture below shows a patient with lung cancer, and how radiation beams enter the body to get at the tumour without giving too much radiation to the spine. 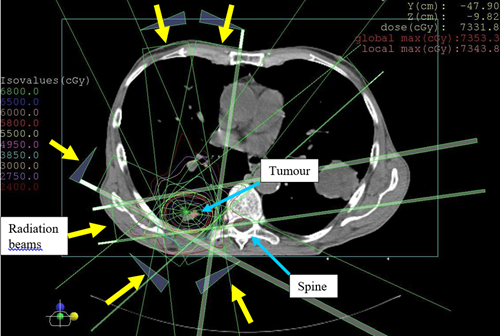 We use phantoms on machines called linear accelerators. These phantoms represent pretend patients, which are used to check the radiation. There are different types of phantoms available, but the coolest by far are the ones that breathe.

Have you seen the car advert that has a robotic arm signing the finished product? Well, in radiotherapy, we use a very similar robot to treat cancers in very hard to reach places like the brain, where there are important organs such as the eyes.  The robot moves around the patient whilst zapping them with radiation.  At the same time, pictures are being taken to make sure we are treating in the right place.  As a physicist, you get to test the system out and then plan the treatment for the patients.  You can even use the robot to print out different pictures on film.

I get to travel the world to show the rest of the physics community what exciting projects I have completed. Being a radiotherapy physicist means I do research and develop exciting new ways of treating patients, then talk about it in big meetings or show the work off in posters.

We eat lots of chocolate! This is cool because they come from our patients and is a way of them saying THANK YOU for treating them and getting rid of their cancer. This is by far the best part of my job, knowing I have been a part of making someone better!

There are always challenges in my role, but it makes being a Physicist more fun because you get to do a lot of troubleshooting and problem solving.  One of the biggest challenges that I have faced has involved setting up a new technique and protocol but within a very short space of time; however, with the right support from my manager, I was able to get this done.